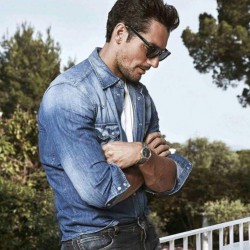 As I start this review, my thoughts are so scattered that I am really not sure at all how to rate this book.  At times I loved it and more than a few times I wanted to throw it aside never to look at it again.  So...how to rate???

I decided to use the Louanne Johnson grading method and go from there.  We shall see where this baby lands.

As a native Tennessean and a graduate of The University of Tennessee, I felt the feel of the book was pretty spot on.  So Leta…

Really, I loved these two from the start.  I adored the friendship, the love being developed between them, the interactions with Jesse’s kids, their backgrounds, etc.   They truly were a very sweet couple and their scenes (outside the bedroom) were really the highlights of this entire book.

Jesse’s sister and Christopher’s Gran were both fantastic, loving, hilarious, accepting, and all together wonderful characters.  Only wish they had consumed more pages.

The fucking saving grace of this book for me was Joe (Christopher’s Brother-in-Law)…he was a shocking surprise as the rest of Christopher’s family (parents and father in law) were a bunch of assholes!

Now back to those Assholes (-2 Stars)

Yeah…every book needs a douchebag…there is no doubt.  But this book was filled with them…likely close to half of the main characters could be categorized this way.  From Jesse’s Sister-In-Law to Christopher’s parents.  And on top of that they were all Conservative Christian Bible Quoting Lunatics.  Really – Do we need more than one of these in a book??  It was exhausting.

So Jesse is bi-sexual…

Honestly I am just not sure he ever really was…the reasoning, the marriage, etc. was so convoluted, to say the least….I think honestly he was confused.  He desired dick from the start and never loved or even looked at another woman besides Marcy.

So Jesse’s wife is essentially dead and in a coma…she will not ever wake up and is being kept alive by machines. Jesse truly does love her and wants to say goodbye and move on, as it has been 5 years.  He visits her weekly and there are some truly emotional scenes between them, where he tells her all about Christopher.

Jesse pays for her care but has no control over being able to turn off the machines (which would have been Marcy’s desire). This falls in the hands of Marcy’s sister.  A lot of time is spent on this in the book really and honestly this was all just one big clusterfuck of a mess as far as I am concerned.  I am still not convinced I understand all the issues related to this and will never know as this is never resolved.

Does this make me a prude?  I am not sure. I mean for me…these two made Logan and Tate (Try/Take) look innocent.  It was all about tone really.  Our MC’s as I mentioned were loving and their relationship grew beautifully outside the bedroom…but in the bedroom I felt really no intimacy…no love, (except for maybe one scene in the middle of the book)  It was acts only which just was a major turn off for me.  It would be like throwing Charlie and Travis (Red Dirt Heart) in a porn…it just did not work for me at all.

Well…to be honest, I think Leta overslept and missed the final exam entirely. We are left with many things left unsaid and unresolved.  To be 424 pages and not come to resolution or give us the following is a HUGE disappointment.

Honestly I almost quit multiple times...and after all this...I wish I had trusted my instincts by 20% and hung this one up.

BR with Matty (who read this monster in a day) and Elsbeth (while the book sucked..our BR was much fun...see her review here)
Tweet